Empowered by specific technologies, exclusive access to precious metals and gems, and a culture that valued royalty and luxury, Ancient Egypt remains a leading force in jewelry influence and manufacturing, that will live on forever. 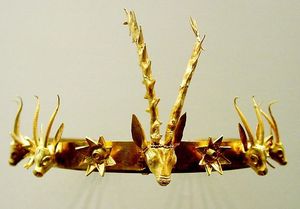 Egypt’s defining moment in jewelry production was their discovery of  gold that was available to them from ancient riverbeds. This enabled Egyptians to collect vast quantities of gold, which they quickly learned was the perfect material for creation of elaborate jewelry. As you could probably imagine, gold became a status symbol – a symbol of luxury, power and religion. Egyptian jewelry quickly became a highly valued trade item in the ancient world. Pieces of Egyptian workmanship can be found in many places around the world, from ancient Persia, Turkey to Greece and Rome.

Egyptian jewelry included necklaces, bracelets, belts, pendants, hair beads and many other jewelry types that were decorated with the designs of scarab beetles, scrolls, winged birds, tigers, jackals and antelopes.

Egyptian did not just wear these elaborate jewels during life, but they also wore it after death, left by their side during extensive burial ceremonies. This tradition of securing jewelry in hard to reach places enabled modern archeologist to discover vast quantities of perfectly preserved Egyptian wealth – thus allowing us to share this knowledge with you.

Information from History of Jewelry