A Taste Of The Ancient World

Understanding the basic diet of the ancient world helps in understanding the cultural values of the various civilizations. The basic ancient diet consisted of cereals, legumes, oil, and wine, supplemented by vegetables, meat or fish, and some other items, like salt and honey.

There are some ideas of what people ate in the ancient world based on literature/artwork describing routine meals or out of the ordinary feasts, including works praising types of wine and honey. Archaeological evidence occasionally provides new insights into ancient consumption patterns.

What The Romans Ate 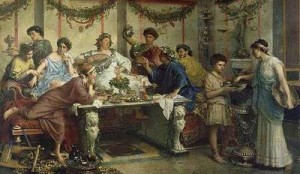 During the Roman Republic, the government’s concern wasn’t so much an ever-expanding waistline or other health issues. There were Sumtuariae Leges (‘sumptuary laws’) designed to limit extravagance. The Roman eating patterns varied heavily based on the rank of classes.

Traditionally in the morning, a breakfast called the ientaculum was served at dawn. At around 11:00 am, Romans ate a small lunch, and in the evening, they consumed the cena, the main meal of the day. Due to the influence of the Greeks and the increased importation and consumption of foreign foods, the cena increased in the size of the portion and diversity and was consumed in the afternoon. The vesperna, a light supper in the evening, was abandoned, and a second breakfast was introduced around noon, the prandium. In the lower strata of society, the old routine was preserved, because it corresponded more closely to the daily rhythms of manual labor.

However, other items that are staples of modern Italian cooking were present in ancient Rome; ancient roman philosopher Pliny the Elder discussed more than 30 varieties of olives, 40 kinds of pear, figs and a wide variety of vegetables. Some of these vegetables are no longer present in the modern world, while others have undergone significant changes; carrots of different colors were consumed, but not in orange.

Butcher’s meat was an uncommon luxury, and seafood, game, and poultry were more common. Aquaculture was sophisticated; there were large-scale industries devoted to oyster farming.

What the Greeks Ate 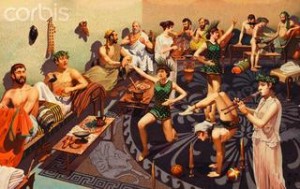 Ancient Greek cuisine was characterized by its frugality, reflecting agricultural hardship. It was founded on the “Mediterranean triad”: wheat, olive oil, and wine. The Greeks had three to four meals per day. Breakfast consisted of barley bread dipped in milkshakes. They also had pancakes called tagenites, which were made with wheat flour, olive oil, honey and curdled milk. Another type of pancake called staititas, which was dough based, was topped with honey, sesame and cheese. A simple lunch was taken around noon and then an additional light “lunch-dinner” was taken in the late afternoon.

Meals were usually accompanied by fruits and vegetables – or “relish,” as they referred to it in the ancient days. The word initially meant anything prepared on the fire, and, by extension, anything which accompanied bread. In the classical period it came to refer to fruit and vegetables: cabbage, onions, lentils, sweet peas, chickpeas, broad beans, garden peas, grass peas, etc. They were eaten as a soup, boiled or mashed, seasoned with olive oil, vinegar, herbs or a fish sauce.

In the cities, fresh vegetables were expensive, and therefore, the poorer city dwellers had to make do with dried vegetables. Lentil soup was the workman’s typical dish. Cheese, garlic, and onions were the soldier’s traditional fare.

The consumption of fish and meat varied in accordance with the wealth and location of the household; in the country, hunting (primarily trapping) allowed for consumption of birds and hares. Peasants also had farmyards to provide them with chickens and geese. Slightly wealthier landowners could raise goats, pigs, or sheep.

What The Egyptians Ate 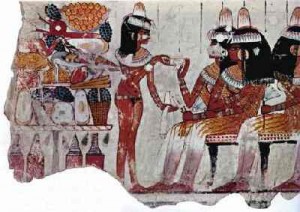 The Egyptians had a particularly vibrant diet and dining experience. There were usually considerable amounts of alcohol and abundant quantities of foods; there were whole roast oxen, ducks, geese, pigeons, and at times fish. The dishes frequently consisted of stews served with great amounts of bread, fresh vegetables and fruit. For sweets there were cakes baked with dates and sweetened with honey.

The staples bread and beer were usually prepared in the same locations, as the yeast used for bread was also used for brewing. In Egypt beer was a primary source of nutrition, and consumed daily. Beer was such an important part of the Egyptian diet that it was even used as currency. Vegetables were eaten as a complement to beer and bread, and the most common were long-shooted green scallions and garlic and both also had medical uses. There was also lettuce, celery, certain types of cucumber and, some types of Old World gourds and even melons.