Did you know that crystals and gemstones have been highly valued for several thousand years? They have been used in the construction of buildings, statues, as well as in watches; in addition minerals have been used for healing, meditation, and for spiritual practice in many tribal 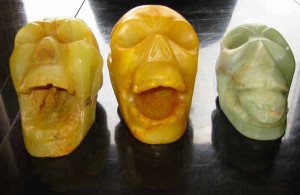 cultures. It was common to use minerals in ancient civilizations for the creation of makeup and pigment, and was often used in the creation of talismans, amulets, jewelry, armor, as well as art. For example, a belt was excavated from a tomb in India that dated back to 3000 B.C.E, and the belt was adorned with carnelian, agate, jade, lapis lazuli, jasper, in addition to other gorgeous stones. Overall minerals such as these have been valued, traded, and used for personal adornment as early as the Upper Paleolithic period, which dates back between 50,000 and 10,000 years ago! Interesting right? Even more fascinating is that there are many instances of gemstones meaning similar things to different cultures, even when there wasn’t any interaction between the cultures. For example, jade was considered to be a healing stone by the ancient Chinese, as well as by the Aztec and Mayan civilizations; turquoise has been used across all cultures to bring those who adorn the mineral, strength, calmness and good health. Want to learn more? Listed below are some more of the ways that ancient civilizations utilized minerals: