The Debate On Funding Greek Antiquities 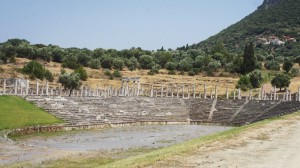 Deep within a forest of olives in Greece, an asclepio, or an ancient healing center, was discovered – but one that has not been recorded in any ancient or modern source, explains archaeologist Xeni Arapogianni. It’s an entirely new discovery that tells us a tremendous amount about the ancient city that it came from. But there is one problem – a common problem amongst many Greek historical sites: there are limited resources for funding these kinds of excavations.

A new article from NPR brings this interesting dilemma to the forefront of the public eye. Greece has always prospered from the cultural and historical richness of its lands. With Greece experiencing one of its deepest detrimental economic recessions in history, it is difficult to find the proper funding for the excavation and preservation of archaeological sites. All funding for the asclepio research, as well as many other popular site, such as the Ancient Messene, has come solely from the private sector. There is much concern over putting this kind of control into the private sphere as well as concern about whether sufficients funds can be raised.

Olive-oil exporter, Giorgos Dinardakis, points out that even though Greek faith in the state is at an all-time low after the economic crisis, most Greeks still don’t trust the private sector. “They think a private company would hike up prices on admission or allow inappropriate activities or generally disrespect the antiquities in favor of profit,” he said. On the other hand, it may be the only way for these landmarks to live and benefit the state as a whole.