Antiquities Are Making a Comeback 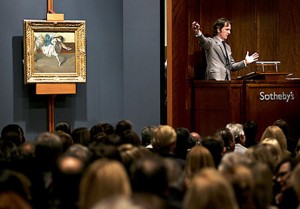 Antiquities are making a comeback in a big way. According to the New York Times, “Last month in London, sculptures from ancient Egypt and ancient Rome sold for 15.8 million pounds and £9.4 million respectively, setting the highest prices at Christie’s and Sotheby’s summer auctions of pre-20th-century works.” The rise in sales of these antiquities can be attributed to the timeless appeal of ancient civilizations. In fact, contemporary artists such as Jeff Koons and Marc Quinn are hopping on the antiquity bandwagon and purchasing various ancient artifacts.

Lorne Thyssen of Kallos Gallery points out that antiquity prices are on the rise, yet are still majorly undervalued! Thyssen has been buying ancient Roman artifacts for over eight years and hopes to “keep the bar high,” as he puts it,  for such valuable objects and pieces of history. An increasing number of wealthy collectors are beginning to realize that the best-quality ancient art is still much cheaper than contemporary art, and that they look good together.

There are many factors that play into the success of sales for valuable antiquities. One unfortunate reason is that ongoing wars in places such as Syria and Iraq, bring about the illicit excavation, and allow looting and selling of antiquities to continue. Samuel Hardy, Honorary Research Associate at the Institute of Archaeology, points out that there is a massive amount of these pieces coming out of Syria specifically. Rebels have dubbed teams responsible for looting to use as international currency. Museum curators and several dealers are working hard to avoid these complications. Museums in the United States won’t buy ancient objects that left their country of origin after 1970, unless they have proof they were legally exported.